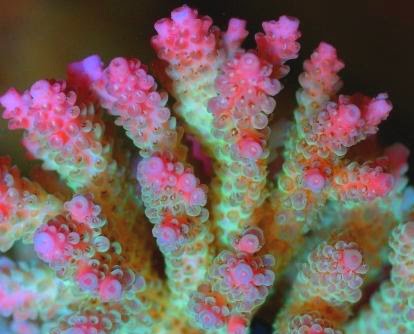 In the saltwater hobby, reefers are constantly trying to find new ways of doing things to make their reef tanks healthier, more stable, and easier to care for. For all corals, but most importantly for small polyp stony (SPS) corals, there are three main points to successful growth: water quality, water movement, and lighting. These are key elements to keeping a beautiful, healthy reef aquarium. In this experiment, one of these key elements will be tested to new lengths: lighting.

In the beginning, when people first began to build saltwater aquariums, they knew almost nothing compared to what we know now. Corals were only grown under the most intense lighting, which at that time was metal halide. Metal halides run hot; bulbs needs to be replaced often; and are certainly not the most energy efficient source of light. T-5 high output (HO) bulbs are more commonly used now for SPS corals, while power compacts are used for the less-light requiring corals, like soft corals, and some large polyp stony (LPS) corals; with the new click being focused on light emitting diodes (LEDs).

LED lighting has come a long way; from its start in transistor radios, to computers, then in cars and now household lighting. Now, it is even available for coral reef tanks. The most common questions about LED lighting in reef tanks are, “Is it even strong enough?”, “How will this compare to metal halides or T-5 high output lighting?”, and, “What kind of PAR ratings can I get from these new lights?” I will explain below.

Is LED lighting even strong enough for SPS corals? Well that’s a tricky question. A common misconception is that light is measured in nanometers, using a LUX meter, which it is. But, this is actually a measurement of the electromagnetic spectrum, or visible wavelength. What we actually need for corals is to determine the daily running PAR. PAR is the photosynthetically active radiation (PAR) which is what we use to measure the usable wavelength of light. PAR values are measured in µE, or µMol/m^2/sec.  To determine PAR one should calculate the amount of light (including every nanometer emitted at a single moment) and measure how many micromoles of photons are projected onto an area. This is then divided by the number of square meters (of covered light). Finally, this result should be divided by how many seconds for which the light was projected.

The Kelvin scale is used to determine the [I]actual temperature[/I] of the light being output by the sun, or another light source. A chart showing the color temperature scale, as well as the electromagnetic spectrum, can be seen below. 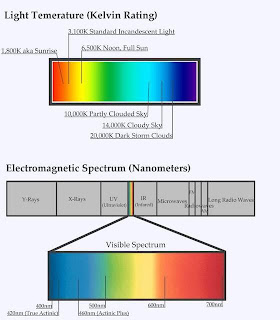 PAR values are measured in µE, or µMol/m^2/sec. With the right amount of PAR, photosynthesis takes place with the symbiotic relationship of zooxenthellae in the corals’ tissues. Zooxenthellae are algae that give the coral its color, and also help with the process of photosynthesis, by which the coral obtains CO2 to produce sugar and obtain nutrients. Too much PAR and the coral will begin to “bleach”. In this process, the coral turns white after releasing its zooxenthellae, to slow down photosynthesis, and prevent death. At this point, the coral is in survival mode. If the coral does not obtain enough PAR, it will be bland in color, due to lack of zooxenthelle in its tissue, and is thus low on glucose and nutrients.

One of the things that make this subject so complicated is that many people think of PAR as the only deciding factor as to how well a coral will grow under certain lighting. PAR is the active radiation penetrated on the coral from a specific light source. But not all of the active radiation is usable by all corals. In fact, light requirements can sometimes vary greatly, even within different coral species. Montipora caprricornus and Montipora digitata are of the same genus, but are two different species. These two corals do not grow at the same rate, when under the same photosynthetic wavelength of light. Each species requires a specific color wavelength (measured in nanometers) to obtain “optimal” color pigment of the coral’s tissue.

This is where the subject goes even deeper. A coral appears the color it does, because light of a certain wavelength is reflected (630 nm for M. digitata). Biotechnology major, Trent L. Glace puts it this way. “An orange M. digitata… looks orange to our eyes because the orange wavelength is reflected (about 630nm). Now this color can be reflected in one of two ways. It can be reflected from the wavelengths being present and just naturally being reflected off of a very specific ‘sunscreen’ molecule.” He further states that “This is what is seen under daylight lights. M. digitata has a preferred optimal absorbance at about 510nm [yellow light].” Glace makes a good point here. As mentioned previously, the visible wavelength of the light is not just the “true color”, but rather, reflected light of a certain wavelength. “The other photosynthesis process here is from re-emitting absorbed wavelengths after they have gone through species-specific photosystems.” (Glace)

“The absorption spectrum that takes place in zooxanthellae has a broad peak in the 400 to 550 nm band. But corals with different types of pigmentation will use slightly different wavelengths.” (Sanjay Joshi. “Photosynthesis and Photo-adaptation.” Penn State Web Server.)

How does this new form of lighting compare to metal halides or T5 high output lighting?  This graph below shows the PAR values versus visible wavelengths obtained from three different Iwasaki 6500 Kelvin, 250watt metal halide bulbs. It also shows how the usable wavelength can vary greatly within the life of the bulb(s). 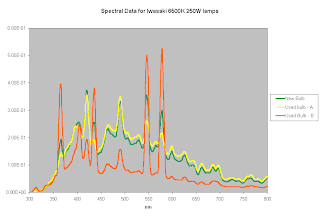 Writer and marine aquarist, Joe Burger did an experiment in 2008, in comparison of PAR ratings from 20 different metal halide bulbs. His results can be seen here. Several of the bulbs are the same brand, but of different Kelvin ratings. 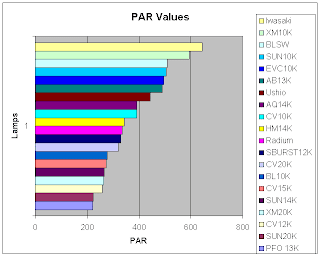 What kind of PAR ratings can one get from LEDs? Many different companies in the reefing hobby have come out with the new form of lighting, but some work better than others.

Below are PAR ratings of several different LED fixtures. LEDs are generally somewhat spotty, which explains why the most amount of PAR can be seen centered in the middle of the lighted area. Using multiple units will solve this spottiness, for the most part. 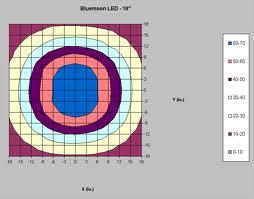 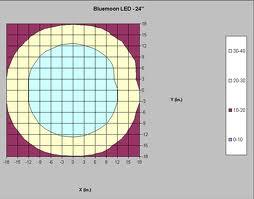 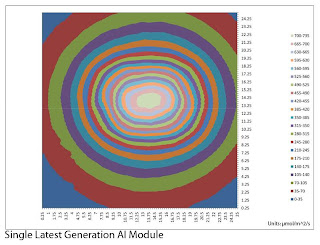 In the upcoming weeks, I will experiment with the use of LED lighting and its effects on coral growth. Specifically, I will be testing the PAR ratings available from the new [I]Orphek Pr-25 PAR38 LED bulbs, on SPS corals [(genus)Montipora, Millapora, Pocillapora, Stylophora, and Acropora ]. The lights will be suspended at 18” (specified height may change) above 21” of water. Having two to three fragments, or “frags”, of each coral genus, at different depths, will allow for greater variation of outcomes. This will more greatly show the effect of LEDs on coral growth. A PAR meter will be used to test the usable light levels at certain water depths, within the aquarium.

Below is a spectrograph of the diodes used in Orphek lighting.